Galiwango has been laid to rest in Mbale district.

Government, family and friends have today bid farewell to the late Dr. Hassan Galiwango Wasswa who passed away at Aga Khan Hospital in Nairobi, Kenya on January 16, 2023. 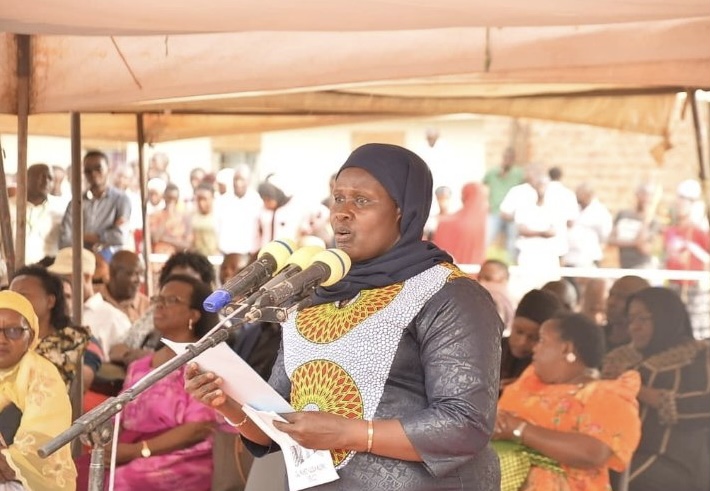 In his eulogy,  President Museveni said he  received, with profound sorrow, the news announcing the death of Ambassador Hassan Wasswa Galiwango, Uganda’s former High Commissioner to Kenya and Seychelles, which occurred on the fateful morning of the 16th of January, 2023.

“On behalf of the Government of Uganda, on behalf of the NRM Party and on my own behalf, I extend heartfelt sympathies and condolences to Hon. Connie Galiwango, the children and relatives of the late Dr. Hassan Galiwango, upon the loss of a dear husband and father. I commiserate with the people of Bugisu Sub-region and all Ugandans, upon the loss of a selfless and patriotic leader,” Museveni said.

He said the death of Dr. Hassan Galiwango has robbed the NRM Party of a loyal cadre and mobiliser in Bugisu Sub-region. He served his Party and Country with diligence and patriotism,” the president noted.

Mr. Museveni said that in his capacity as Uganda’s Ambassador to Kenya and Seychelles, the deceased demonstrated total commitment to championing Uganda’s interests abroad.

He emphasized that Dr. Galiwango has left behind a legacy of a responsible and transformational leader. ” NRM defines responsible leadership as one which accurately diagnoses the challenges or bottlenecks of society and prescribes the right cure for them”, the President said, emphasizing that Indeed,Dr. Galiwango understood this fundamental principle and integrated it into his leadership style.

“He has left behind a society that is more transformed and empowered to attain greater prosperity”, Museveni said adding that a transformed society is the only lasting tribute to a great leader. ” It is the testimony of a faithful servant”, Museveni added, “we therefore, celebrate Dr. Galiwango as a mission-oriented leader, whose great talents and experience will be dearly missed”.

“In this hour of grief, I pray that the Almighty God grants the bereaved family the courage and strength to go through this trying moment. Dr. Galiwango has departed from us after distinguished service to Uganda and to the international community,” Museveni said.

The President called upon everyone who associated with Galiwango must be proud of this memory and the sense of bereavement which we feel now, should not diminish it.

The Vice President took time to personally eulogise the late Dr. Galiwango as a true believer in Allah.

“He was a true reflection of the virtues of Islam which include:- love, humility, kindness, peace and unity,” Alupo said.

She described the late as an accountable and dependable leader.

She told mourners who gathered in big numbers to see off their beloved one, that being a chief architect in the implementation of NRM manifesto, H.E the President  was currently out of the country to further enhance trade and investment between Uganda and UAE.

The Vice President  persuaded all ugandans to focus on Government programs of health, household income generating activities, education, roads, railway, water, PDM, peace and security etc while conscious of the fact that the expeditious implementation and application of those programs will climax into the 2026 activities whereby H.E YKM the President of uganda will participate fully.

Speaker after speaker eulogised the late Galiwango as an industrious man, pragmatic and diplomatic gentleman who has been a pillar of development across the country.

The NRM Secretary General Richard Tadwong thanked the people of Mbale for grooming and mentoring Galiwango. “It’s for the reason the President appointed him in all those responsible positions”, he said, adding that Galiwango was a very brilliant man who mentored so many people.

The Mufti of Uganda Alhaji Shaban Ramadhan Mubajje appealed to Ugandans to avoid politics of segregation especially at funerals and weddings. He thanked His Excellency the President, Vice President and government at large for respecting and honoring Dr. Galiwango, describing him  as an educationist, unifier and a gentleman who has loved his religion jealously.

Dr. Galiwango was born in 1958. He started his political journey as a counselor of Namatala Ward in Mbale Municipal Council.

He was then appointed the RDC of Mbale district in 1999 and  transferred from Mbale to Ssembabule and later to Masindi.

In 2009 he was appointed as the Director of Mobilisation, Recruitment and Cadre Development of the NRM.

On top of that position he was also appointed as the Director of Finance and Administration the same party in 2011.

In 2021, he was appointed as the High Commissioner of  Uganda to Nairobi, Kenya and Seychelles until his death.

Eternal Repose for his Soul.