Oh Uganda! may God uphold thee,
We lay our future in thy hand.
United, free,
For liberty
Together we’ll always stand.

Oh Uganda! may God uphold thee,
We lay our future in thy hand.
United, free,
For liberty
Together we’ll always stand.

Oh Uganda! the land that feeds us
By sun and fertile soil grown.
For our own dear land,
We’ll always stand,
The Pearl of Africa’s Crown. 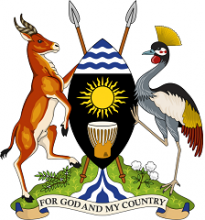 The shield and spears represent the willingness of the Ugandan people to defend their country.
There are three images on the shield: those on top represent the waves of Lake Victoria;
the sun in the centre represents the many days of brilliant sunshine Uganda enjoys; and the traditional drum at the bottom is symbolic of dancing, and the summoning of people to meetings and ceremony.

The shield is flanked on the right by a Crested Crane, a subspecies of the Grey-crowned Crane and the national bird of Uganda. On the left is the Ugandan Kob, a species of Kob that here represents abundant wildlife.

The shield stands on a green mound, representing fertile land, and directly above a representation of the River Nile. Two main cash crops, coffee and cotton, flank the river. At the bottom is the national motto: “For God and My Country”.

The Uganda Flag consists of six equal horizontal bands of black (top), yellow, red, black, yellow, and red (bottom); a white disc is superimposed at the centre and depicts the national symbol, a grey crowned crane, facing the hoist side.
The three colours are representative of African peoples (black), Africa’s sunshine (yellow), and African brotherhood (red being the colour of blood, through which all Africans are connected).

The flag was designed by the Ugandan Minister of Justice, Grace Ibingira.