Prof John Yakobo Okedi has been installed as the 3rd Chancellor of Kyambogo University.

The Installation ceremony, held at Kyambogo University grounds follows his appointment by President Museveni after nomination by the University Council, with his tenure running for four (4) years. 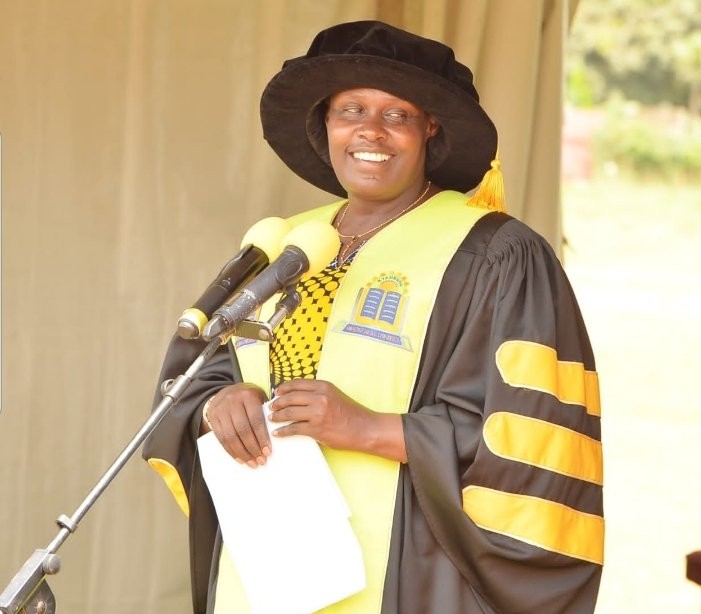 President Museveni, represented by Vice President Jessica Alupo congratulated Prof. John Okedi upon his appointment on this new assignment where  “you provide general oversight over the academic, financial and administrative operations of the University. “

The President said he was sure that Prof Okedi would utilize his vast experience and expertise to steer the University to greater heights of excellence.

The President commended the University for heeding his advice on prioritizing teaching of science and ICT courses. “Courses in science and ICT give students a more competitive edge in the job market; thus, eliminating the problem of youth unemployment,” he remarked.

The President said that Institutions play great roles in championing the socio-economic transformation of society through programmes that are relevant and aligned to national priorities.

The programmes, the  President said, should equip students with  skills to enable them “become employable and enhance their capacity to employ themselves and others,”adding that research from the universities must contribute to the government’s strategy for industrialization, as he hailed  Kyambogo for its progress thus far.

The President pledged continued support towards different partnerships, while also singling out for recognition, the University’s ICT innovations such as  the E- Campus, the Academic Information Management System (AIMS) and their

development of the Government E-procurement system (e-GP), which is currently being piloted in 36 government departments and agencies, among others.

The President thanked Prof Sebuwufu for his stewardship and his role in building the university. Prof Sebuwufu was instrumental with remarkable wealth, expertise and leadership skills in the education sector in Uganda.  Because of his immense and exceptional skills, he “was never allowed to retire” said Prof Katunguka, in his remarks earlier.

The Vice President alluded to that rare experience that the university held onto, remind the audience that this should apply to other positions of leadership. “Leaders with vast wealth, exceptional leadership and commitment in building our country shouldn’t be allowed to retire easily. Let’s hold onto them”, the VP remarked as she thanked the University for sticking to the law in executing their mandate.

She congratulated Prof Okedi for attaining this position  and prayed that he steers the university to greater heights.

State Minister for Education, Dr.Moriko Kaducu, representing Education Minister Janet Museveni thanked the outgoing Chancellor, Prof Sebuwufu for “his selfless and tireless service, and for 10 years  as a titular head who contributed significantly to the development of Kyambogo University.

The Minister  congratulated the incoming chancellor for accepting to take on the new mantle. “Prof Okedi is a global academician and researcher with vast experience in leadership, an inspirational leader with commitment to quality and diversity”, the Minister added.

She hailed Prof Okedi as a man who has demonstrated excellent professionalism as  a global profile and highly capable of driving the position to greater heights”, said Kaducu, reading from the Education Minister’s speech.

The Chancellor-Prof Okedi thanked the President for the appointment. He took immediate note of Government’s support through the Higher Education Science and Technology  (HEST) project. From this support, the University  constructed new buildings and rehabilitated old ones.

He called for  further enhancement of ICT  to support digital transformation and also commended the progress in research and innovations.

“I pledge to provide the necessary guidance and support in management of the University and its operations as we continue to advance the University to strengthen its niche in Science,  Engineering,  Vocational Education,  and special needs”, he said after he received  the Ceremonial robe and the three instruments of power; the Mace, the Universities and other Tertiary Institutions Act 2001, and the Constitution of the Republic of Uganda.

2nd highest position in  the university saying his experience was crucial in running Affairs of the University in which he has served before-as  chairperson of council; for eight years renowned academic, great researcher. The  Vice Chancellor  said prof Okedi’s tenure was the beginning of peace building. Prof Katunguka also paid tribute to the outgoing Chancellor John Pancras Sebuwufu who was described as a man of great wealth of experience  especially in Management of higher education. Prof Sebuwufu  is former Vice Chancellor of Makerere University  and Head of Association of commonwealth universities.

Prof Sebuwufu,  outgoing  Chancellor expressed his gratitude towards the Vice President for the memories he holds while she was Minister for education and Science and he, as Vice Chancellor Makerere of Makerere University. He said serving the University was a privilege  and he was happy “to leave Kyambogo University a far better place than I found it and where we failed, it is not for lack of resolve or effort,  but for weaknesses as human beings”. Prof Sebuwufu said, as expressed heartfelt sentiments to the incoming Chancellor, saying  “an old campaigner in the field of Institutional leadership and academia replaces me as Chancellor of this great University” he remarked, as he bowed out.”

The chairperson of the University council; Dr. Mary Goretti Nakabugo took a moment  to appreciate the appointment  of the Vice  President. “You are a role model, an inspiration to many more girls, your position as Vice President shows that young girls can do it, given the opportunity”.

She said the appointment of Prof Okidi arose out of strong commitment to the university  in various ways and way only a wise decision to submit his name to the President. “By his nomination to the President, the fifth council was  putting our university first and looking to its future’, said Dr. Nakabugo.

At the ceremony, Prof.Okedi was accompanied by his wife and family.