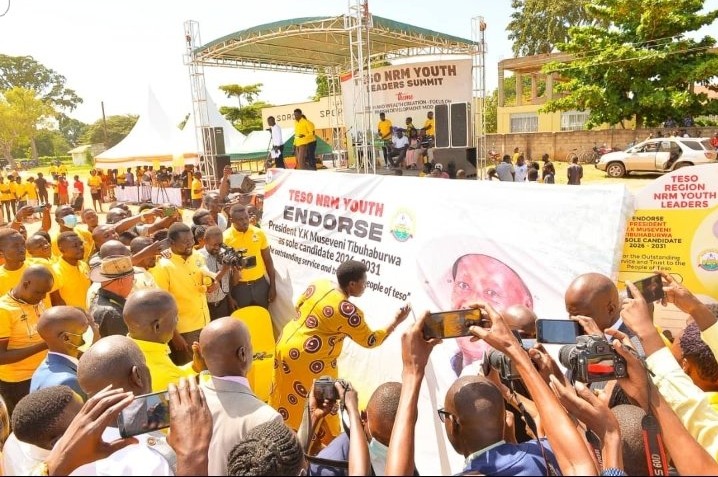 Serere, and soroti city gathered in their strides at Soroti  Sports Grounds, at the first ever Teso NRM Youth leaders Summit, geared towards the further dissimenation of the Parish Development Model (PDM).

The session conducted by Julius Kapwepwe saw the youth increase their awareness in the programme that is designed to drive 36% of peasants into the money economy, leaving no one behind.

At the summit, the youth also took on ambasaddorial roles to further disseminate knowledge to other non participants in appreciation of the PDM which they described as an “economic war they must win in order to eradicate poverty.”

Vice President Jessica Alupo, who was chief guest at the summit thanked the youth for inviting her for “the interactions  between young and old leaders that ensure continuity of the NRM party”.  She referenced the remarks of other speakers in calling Teso  leaders to  unite. “Unity is strength, in numbers, it helps us work for better politics of shared interests not secteriansim,” she said.

In further interactions, the VP guided on qualities of a good leader, saying one must be hardworking, patient,full of humility, be a good listener. A good leader shows the way, and I thank you for leading the way in showing the people of Teso that President Museveni is a good leader who we express our continued solidarity with.”

The Vice President called upon the youth of Teso to increase their participation in development, especially in Agricultural products like fruit growing. She asked other youths in other parties to join the NRM, a party she said is continually working for the good of the country. “We lost so much time during the LRA invasion into Teso, we  lost more time due to cattle rustlers, we also lost alot of time as Teso during UPA activies.’Now is the time to work,”the VP guided.

Earlier, the youth of Teso region made loud statements, in expressing themselves on an issues based summit.

From Amuria, the youth asked for hand tractors in order to increase their participation in poverty alleviation programs. From Kalaki, the leaders requested for systematic funding for the youth initiatives, while the youths of Kumi said they wanted more funds for cattle compensation.

Leaders from Kaberamaido rightly demanded for support in areas of fish farming and goat rearing. From Soroti, the youth leaders  asked Government to attract  investment in the Soroti  Industrial park as one way of addressing unemployment. Leaders from Ngora raised the issue of improved Agri-business. In a slight mark of difference, the youth leaders of Katakwi expressed their gratitude towards Government’s  efforts in restoring security at the boarder with Karamoja.

Jacob Eyeru, the chairperson of the National Youth Council  (NYC) led the endorsement process for President Museveni as the NRM flagbearer for 2026.

“It is the energy of the young people of Teso to remove poverty from Teso.

We want Teso to develop we want continuity, we want to go on with the leader that has excelled for Uganda. The (NRM) party must proceed with the best able candidate”, he remarked.

Eyeru added, that the direction for the youth is to work for development continously.

“I want my  fellow leaders to second or do otherwise, as the different district youth leaders stepped up to announce their endorsement for a leader described as the  “father of the revolution”.  “Today, as we gather here in different capacities as  Teso Youth leaders, we endorse President Museveni as candidate for 2026”, said Eyeru, the chairperson National Youth Council.  “For his stable, visionary leadership and the quest to champion East African integration, President Museveni is still strong to contest in 2026. Our direction as Teso Youths is based on what we are seeing of the able leadership,”

Jacob announced, amidst ululation from the crowd.

Ministers present expressed their  support for the youth choice of leader.

Gen Jeje Odong, Minister for Foreign Affairs and MP Amuria called for unity in Teso, as the only way to enhance development.

Musa Ecweru Minister of State for Works, also MP,  called for continued  Government support for NRM youth in their endeavors. “The NRM leadership must always support NRM youth to enable its continuity,” he said.

The Minister for Teso Affairs-Clement Obote expressed his gratitude for the youths’ decision,  interest and ownership in their affairs.

“I thank you for taking interest in the future of Uganda”  he said,as he took a swipe at another country that has changed three Prime Ministers in a short while. “Are these the people that should lecture us on leadership and democracy? Thank you for  standing up for your country,” the Minister said.

The event drew a number of other regional leaders.