Youth in Mitooma district have endorsed President Yoweri Museveni as their candidate for the 2026 General Elections. 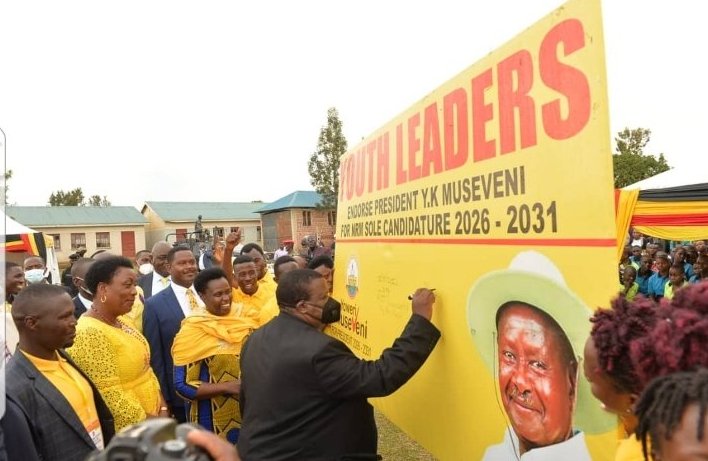 “We emphatically recommend to the membership of the Ruling National Resistance Movement and its organs that His Excellency Yoweri Museveni,our leader and General of the African resistance, continues leading the party and the State in 2026 and beyond as we eliminate bottlenecks to transformation,” Adrian Namanya the Mitooma youth leader said.

The youth were gathered to  mark the International Youth Day under the theme, “Unleashing your potential and roles as youth in National Development”

Namanya explained that President should continue uninterrupted to pilot skilling programs for youth throughout this country.

He urged the President to revive the youth livelihood programme as one of the Government interventions which had responded to unemployment rates and poverty among the youths in the country to start their businesses.

Namanya told the youths that President Museveni and the NRM government are committed to continue empowering the youths and women who are economically disadvantaged.

Namanya made the pronouncement during celebrations to mark the International Youth Day at Bubangizi Secondary School in Mitooma district today. The youth presented a board whose resolution was signed by dignitaries including the Vice President Jessica Alupo.

In her remarks, the Vice President thanked the youth of Mitooma for their fore sightedness. “These youths have demonstrated that the leadership of his Excellency President Museveni is one that embraces everybody; special interest groups; youth, women, elderly, disabled persons and everybody else” Alupo said.

She noted that the youth  could  not wait to bring their message across adding that, “We welcome the idea from the youth and that’s why we have signed on the board,” Alupo said.

She explained that fortunately for the case of Uganda, the youth are 70percent of the total population indicating that what they have signed today is already supported by 70percent of Uganda’s population.

“Therefore, we other segments of elders, women, disabilities will just come to reinforce you the youth in order for us to achieve success in 2026”, she added.

Alupo however added that the matter shall be tabled before the President and the Central Executive Committee of the NRM party to generate consensus.

The Vice President explained to the gathering that she had consulted with the Justice and Constitution Minister Norbert Mao about the matter who informed her that the youth had not broken any law including those who signed on the board in support of having President Museveni as sole candidate.

Alupo thanked Mao, Uganda’s custodian of the Constitution for assuring the gathering that they are moving in the right direction.

“When Mao speaks, he does so from the point of experience, historical understanding of the country and interest in building cohesion across the country. We do not take your counsel for granted,” Alupo explained.

She told the youth that whatever they do they should build a foundation which is firm, formidable and sustainable.

She re-echoed the President ’s message for people to engage in Commercial farming which leads to value addition, ICT, Services and Industrialisation. She told youths that the NRM Government has built a strong foundation for them to do any meaningful economic activities.

The Vice President reminded the youth that as they enjoy their rights they should know that all those rights come with responsibilities.

The weight you give to the rights you enjoy should be the same weight given to the responsibilities that come with them and asked them to embrace dialogue in resolving conflict.

Alupo told the people of Mitooma that the factory of bananas is being worked on to serve the interests of banana farmers in Ankole.

She promised to continue mentoring the youth and ask all leaders to open their doors to the youth for mentorship.

Gen. Otafire in his speech promised to address issues of electricity, roads and water in the constituency. However on endorsing the president, Otafire noted that the process of endorsement of the  candidate is vested in the central executive committee and promised to inform the president about the youths’ desires. Nevertheless he welcomed the idea from the youth.

He urged the youth to fight for their country but not for individual interests . “Stop fighting for personal interests, fight for the entire country that’s what we did in the 1980s,” Gen Otafire noted.

“Fight to build and not to destroy. Build Capacity to resolve conflict without confusion that’s how a civilised community should be. Fight for value and what concerns you. Be careful by emulating the good examples of your good leaders,” Otafire counselled the youth.

The Justice and Constitutional Affairs Nobert Mao assured the youth that the future of Uganda is very bright and they should keep themselves themselves healthy.

He said Uganda is built on the dreams of the young people and challenged them to dream big and work towards these dreams.